Something About This Time of Year...

...apparently makes me want to crochet in morse code. This time last year I was frantically finishing Seb's amazing blanket with a secret morse code message. 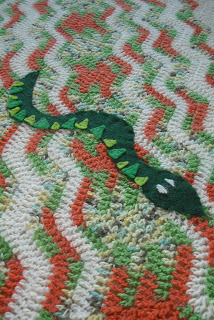 Well, yesterday I had a phone call from a lovely lady who I did a commission for well over a year ago. Turns out her and her Mrs have been married for seven years (together for 22 and they're on of the nicest couples I know). Apparently the 7th anniversary is wool in old fashioned terms and desk items in the modern version (who knew there was a modern version!?). So I agreed, against my better judgement to do a woolly desk tidy as a commission. She left the design up to me and here's what I came up with: 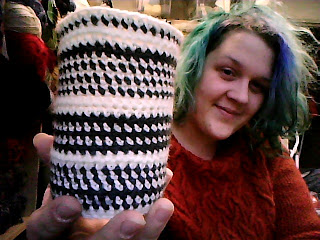 (Ignore the face and hair - I was up 'till one last night trying to get on with another commission that I stupidly said yes to...)

It says 'love' in morse code and and I am immensely proud but trying to get that bugger to stick to it's drink bottle inner has left me with that horrible dry smoothness that only superglue on fingers can create.

The yarn I used is the f.a.b.u.l.o.u.s. Patons Diploma Gold DK in charcoal and cream and I used a 3mm hook to get a good tight tension. I used this Wikipedia article to get the morse code. One row of doubles for each dot and two rows for each dash. The dots and dashes are separated with one row of cream doubles and the letters with two rows of half trebles. Dead easy ey? And dead good for hidden geekiness, it sort of just looks random doesn't it?

One day, probably this time next year, I will make a morse code jumper.

Off to finish the other commission, ain't no way I'll be as happy about that so you'll probably not get a blog about it but I have worked out a way to do the other blog I told you about without having a proper camera. Brill!


Posted by Knit Nottingham at 11:12 No comments:

So - days and times we'll be open:

I don't usually work on Mondays so I'm still having the 24th off which is marvelous because since I've been working, and I started at 11, I've never had a Christmas Eve off. I'll be spending it drunk most likely.

In other news, I didn't look like a drowned rat on Saturday evening: 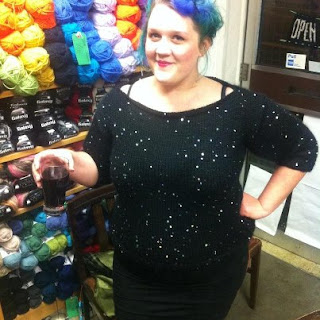 And I even pulled! Not the love of my life I'm afraid but he was rather handsome and I remember him having lovely glasses. That'll show the wanky bastard!

I'll be back during the week because I have a marvelous other Christmas idea that takes about ten minutes. I just have to work out how to take photos without a camera seeing as I drunkenly broke my phone on Saturday. Pulled then broke phone - equilibrium.

I'm off to finish another Christmas present! (Still on track. Crossed fingers.).


Posted by Knit Nottingham at 13:08 No comments:

All I generally knit are lace shawls, scarves and on one occasion....a hat, mainly because I tend not to wear much in the way of knitwear and its thee intricacy of lace that intrigues me more than the finished object.

But, I have now managed to knit fingerless gloves...well at least one, on dps with a thumb. Just how good its that??

Oxford down fleece, spun sort of aranish and knitted tight and thick giving a nice close fit, very warm and reminds me of knitted jumpers when I was small. 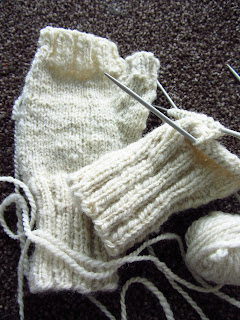 Posted by Knit Nottingham at 15:50 No comments:

New Things and a Pulling Jumper

Blimey - we're really treating you with these blogs ain't we? All of a sudden I feel inspired and energised and ready to face the world. Perhaps my moping was just storing up energy for the blitz that I am doing on my life (and Christmas present knitting) now. Maybe.

Anyway, I mentioned the sparkly pulling jumper t'other day and it's now finished. If this doesn't get me a husband then I think we're all buggered... 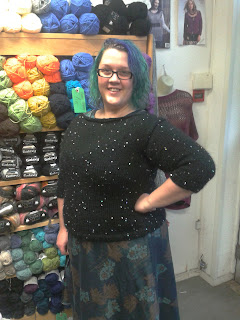 Rest assured that when I'm in pulling mode I will look less like a drowned rat/bag lady (would you believe I'm actually wearing a grey stripy jumper with this dress?! What odd combinations I think look lovely when I've not had my coffee...). I will get some brill photos on my night out on Saturday.

Just to remind you, it's done in the g.l.o.r.i.o.u.s. King Cole Galaxy Chunky and the pattern is King Cole 3612 but because I've been shouting about it a lot we're currently out of stock of the pattern. It'll be back in soon enough though. :)

So, onto something a bit less selfish, the lovely Dee has made us some more of her sparkly art yarns. You'll have seen them before if you've been into the shop and they are really popular with people that make little bits like scarves and hats but Dee's recently been using it to make re-useable, washable, recycled tinsel. It looks bloody marvelous - we have some in the shop and I think you lot will like it too. 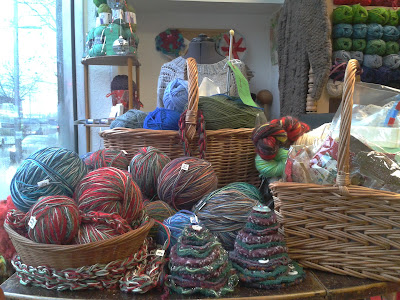 She's written explanations of how to make the crochet on her blog which you can get to if you click here. It's perfect to do with the kids, and it'll be mega ridiculous quick if you need something to do right now to get your mind off Christmas presents... I understand... It'll be over soon.

Now, maybe I should have started with this, all of the proceeds are going to Action Village India. We won't be taking any money from the sale of this lot. She's also sent in the CUTEST little Christmas tree decorations made out of recycled materials like *accidentally* felted jumpers and tea towels. You can see them right at the front and in the middle of the picture. The basket towards the right of the photo is full of lovely craft packs with lots of bits and bobs to get going with Christmas cards and decorations. It's all a bit close to Christmas for cards we reckon, but what better to shut the kids up over Christmas than a little activity pack? Especially when the money is going to a very worthwhile cause.

Once again, to read a bit more, head over to Dee's blog, BirdSingArtBlog.

Right, I'm off to put the finishing touches to some mittens that have been requested for Christmas. Then it's slippers, cushion covers, a blanket, two pairs of socks and a shawly-wrap thing. I'm still hopeful it'll get done, please don't rain on my parade....


Posted by Knit Nottingham at 18:09 No comments:

This is my idea from yesterday but it didn't work out like planned. I wanted to do a lovely but easy lace thingy a bit like the Moss Cowl but it was starting to look a bit mental with all of the LOVELY COLOURS IN OUR BRAND NEW YARN!!!!!

Alright, alright, I'll admit that it's not that brand new. We got it a few weeks ago and I was mighty excited but then, remember that bloke who I went on a date with? Wanker! (Does that surprise you!?) And I've been moping and miserable for a few weeks. Bad business owner. But now it's on the shelf:

Which meant I had to move a bit of the shop around which I enjoyed for the first time in bloody ages. Lovely to spend so much time with yarn. Making pretty things happen.

And then it went on and off my needles: 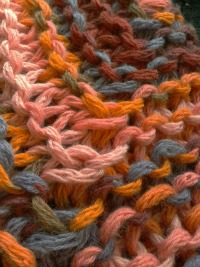 And then onto the internet: 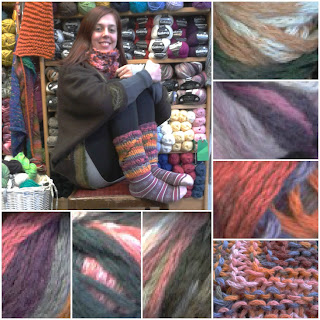 I am majorly hoping that Cygnet will take some photos so that my atrocious phone camera skills won't be on display for any longer than necessary but they'll do for now. It's one of those yarns that look so much nicer in real life. *sigh*

When it first came in the Lovely Verity just had to cast on some leg warmers as soon as she saw it in the 660 colourway (inspiring name, huh?) to learn how to do lace. She used 10mm needles, cast on 24 stitches and ended up using just under two balls. You can see them above - marvelous?

Me? I just wanted to get it around my neck. So I've made two cowls (one's at home), the other is here: 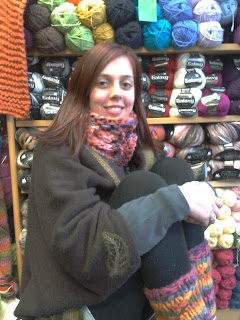 It's a really simple mitered square pattern, literally just a square sewn up and I reckon anybody would get it done in an evening. One ball. 20mm needles. Bish bash bosh, that's your secret santa sorted. Thank me later.

Click here to get the pattern pdf. It may one day go onto Rav but I want to knit my new sparkly pulling jumper, because bugger that horrid man from earlier, I'm going out on the pull on Saturday.

Now, back to the to-do list (which mainly has knitting my pulling jumper on it).

P.s. I called it a Cowl Just to Stop You Going Mad because the mitered bit doesn't really show up when it's worn (it does if you know what you're looking for) but the decreasing means that it's not just a plain garter stitch cowl - just enough to stop you going mad.


Posted by Knit Nottingham at 16:22 No comments:

Well, we've been a bit shit haven't we?! I've been overcome by commissions and trying to get them done in time to get some Christmas knitting done and it's meant that I've barely been here or on facebook but yesterday, I stayed in bed all day and knitted/crocheted as if my life depended on it and I've only gone an finished haven't I!? So I'm feeling much better. And now I want to talk about these beauts:

BUTTTTTTTTTONS! (Set atop of my latest WIP... a jumper in the beautiful Galaxy Chunky...mmm...).

These buttons are made by my lovely friend Steph. She's the one that works at the Bead Shop, she's also the one that made this bloody marvelous jumper out of the Truly Wool Rich 4ply. 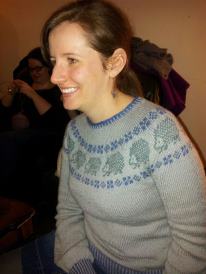 So, she's made us these lovely sets of buttons to sell and I know you'll love them because I sold one before I even got them out of the bag. They're made out of polymer clay and they have a slight sparkle to them. She's imprinted stocking stitch as a pattern into them but it's subtle - like a little knitter's injoke.

Click here to see Steph's version of a blog I promised you - and then read the rest of it too. Good blog.

I promise more blogs soon. I have an idea!


Posted by Knit Nottingham at 12:49 No comments: