So, with about five rows to do on a shawl, and all the wrapping to do to get stuff in the post, tell me why I am on t'internet looking for stuff like this?

To be honest, I'm just a teeny bit fed up with the whole thing (don't worry, I should be over it by Saturday - Monday at the latest). The knitting, the spending, the cooking, the cleaning, the decorating plus my all time favourite – the big argument.

The big argument isn't going to happen for a day or two yet. I know this because, so far, there has only been a bit of sniping and one (short) shouting match. Open warfare is still a little while away.

Still, to wish you all the best the season can bring, here's a little shot of Eleanor living up to her Rav name.

love June x
Posted by Knit Nottingham at 15:03 No comments:

Overwhelming interest in the blanket and pride in the fact that it is 99.99999% finished leads me to post this photo which I trust gives away no more than I've already revealed... 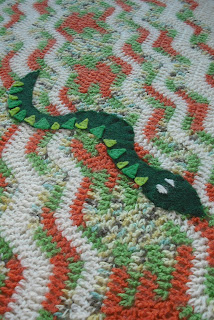 Posted by Knit Nottingham at 12:33 No comments:

Blimey, it's been a while hasn't it?! It's that time of year - super busy in the shop, super busy with commissions and super busy with Christmas crafting. I do apologise, I hate those blogs where you give them a week, expect them to have posted a fair bit and then you turn up and there's nothing. I promise we aren't that kind of blog. At least, I really don't want to be!

I want to talk about what's really inspiring me today which means stuff about the shop will be relegated to a small space at the bottom. Not that it's not exciting but you know how it is.

So, Christmas knitting. Oh yes, I've succumbed again this year. I always say 'I won't bother next year' on boxing day every year. But every year around about September, I get an urge that weighs so unbearably heavy on my shoulders that I just give in. I'm trying to be sensible though so those people who don't want knitting or crochet (for whatever reason, I'm not judging, only whoever-it-is-up-there can do that and I've heard the fiery depths can be quite comfortable if you're protected by a woolly layer. Which you won't be. Because you don't appreciate my knitting. No hard feelings...) or those people who've pissed me off this year aren't getting anything (oh me, oh my, I can hold a grudge). No knitting for the sake of it this year.

So, I told you a few blog posts ago that mum's present is done and dusted. I made her a Shipwreck Shawl. Actually, I started making myself a shipwreck shawl but lost impetus about...ummm... three years ago. Or so. Then I was ill and decided I could do that seeing as there was only 10 rounds to go and I did it. But I didn't like it. Then mum said she might want a blanket for the colder evenings and I thought that the shipwreck shawl would be lovely but now I'm second guessing myself seeing that it's holey and has beads of it. How is she supposed to snuggle? But we'll see. If she hates it I can knock up a....

Ripple Blanket which is what I've made for my dad and nephew. Dad's is in the scrumptious Cygnet Grousemoor Aran in the cranberry colourway striped with some silver grey DK from stash (colours to match his van for when he's napping on a long journey - he does that a lot - like a few times a month. As an aside, we live in Wollaton, he once called from Bramcote Lane which is about five minutes drive saying he'd be home in a few minutes. He didn't turn up until about two hours later because he'd decided to have a snooze in the van. Weird .Wouldn't you just come home and nip to bed? He's an odd one). I used a 5.5mm hook and somehow it worked out okay even though the grey was DK. Just two rows of each colour for as long as I could stand and then a stripy border and Bob's your uncle. It's finished bar a few ends and I'm considering how to block it. A steam block would be nice but can I be bothered and would it lose is smoochiness? I'll probably plump for a quick pin and spritz but I'd rather do it when he's out the house for a day or two so we'll have to see. Anyway, consider that done.

Then comes the nephew's blanket which has been the subject of a fair few blog posts. The body of it is now officially done (it says 'Seb in the jungle' in morse code in case you forgot...). It looks wonderful, even if I do say so myself. I've bordered it with a couple of rows of cream and the idea is that that will do but if I get time I'll add some more. I still haven't made up my mind of the colours though and I think it'll probably end up being a simple border with the Zig Zag 4ply and the cream that I used if I do do it. We'll have to see. But, more exciting than that is that I've bought some felt to make animals!!! I'm making parrots, snakes, tigers, elephants and monkeys and they're coming up spiffing! Problem is, Caroline is now a knitter, and I know she reads this which means that I can't show you photos because I want it to all happen on Christmas day. So you'll have to coco. I'll show you afterwards though and I promise to give you photos of the cutest nephew all wrapped up in crochet and/or using it as a tent. Who can say fairer than that?

Then comes Caroline's present. I can't tell you much at all. It's in her queue/favourites (I can't remember) and I know she's tried it but couldn't do it (at the time, no doubt she could now), I'm using the yarn that she tried it in so I know she'll like the colours. It's a DK. I've got to knit 16 inches and I'm having to use the single loop (or travelling loop) method. That's all you're getting.

And brother in law is getting something he requested too but I'm not putting much on here because maybe she reads it out to him (!??!!?). I don't know why I think their family life might be like that but to be on the safe side. There is a tiny surprise going to be wrapped up with it though. That's exciting!

Only one/two/three other person/people is/are getting made Christmas presents. I say this because actually, it my best friend who I'm making it for and she'll use it with her lovely boyfriend who she's just moved in with and hopefully there'll be enough to go around so that their equally lovely house mate can use it too. But I won't bore you with that. It's sewing and it could all end up in the frog pond anyway because, have I ever told you how atrocious I am at sewing?

And now on to shop stuff - exciting times lay ahead, be warned!!!

King Cole Moorland Aran - MMMMMMMMMMMMMMM! It's lovely! Earthy kind of tones, subtle, tasteful, soft as you like! As far as I can see there are three plies to the yarn, two in the main colour and then one thick and thin sort of thing in beiges and browns which is the same in all of the colourways. Beware of the photos a little because, especially with the Bluejohn, they make it look like there might be pinks and purples in there when there aren't. We just took the photo's off the King Cole website because my camera is actually a phone and I assume their's isn't... Either way, the Bluejohn in the favourite in the shop and on the web so you might want to come and have a goosey gander.

The yarn also comes with some delicious patterns of which my favourite is 3332 (look at that dress!) but being sensible I'm going to cast on for the cardigan in 3329 because it'll go some way to hiding any lumps and bumps rather than displaying them for the world to see. Again, those photo's are from the King Cole website and the quality isn't the best - when I next have an evening free I'll take the patterns home and scan them for you. Until then, come in and see, especially if you've had on your mind the some sort of modern aran because these really are the loveliest I've seen.

And then we now how KNIT PRO SOFT TOUCH bloody CROCHET HOOKS! Oh my, oh my, oh my!!! I've wanted the Clover ones for a while and a few people have asked about them but we don't stock anything else from the distributor who stocks them so I've bided my time and now Knit Pro have listened to my inner thoughts and brought these to me. We chose the gold colour because, well, I can, but if we have enough interest we'll go silver too. Sizes in stock are 2mm, 2.5mm, 3mm, 3.5mm, 4mm and 5.5mm. I ordered more but I think everybody had the same idea as me but surely, those sizes will do you most of what you want and wouldn't a 5.5mm hook and a few balls of the Riot Chunky make somebody's Christmas? Maybe even your own??

That's it, I'm off to crochet my little heart out with my new hook and I'll see you in a day or two. Maybe next time I'll stretch to some photos....


Posted by Knit Nottingham at 12:37 No comments: