As promised here are the photos of all the wonderful squares that you knitted and crocheted for our fundraising event. As we speak the squares are being sewn into the heart, as soon as this is done and the heart has been framed we will let you know. For now enjoy the photographs and thanks again to everyone that came along and joined in the knitting and crocheting fun. 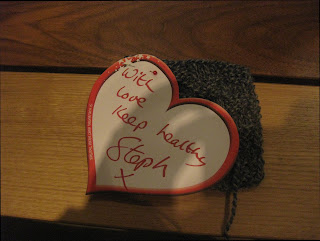 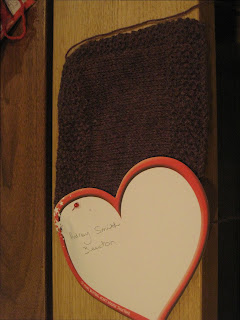 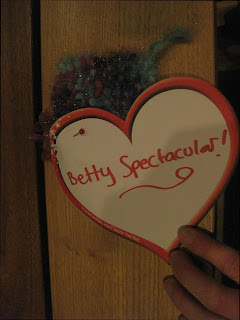 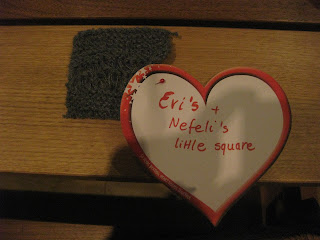 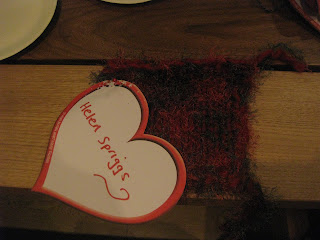 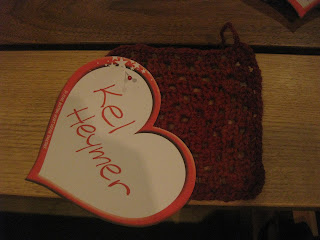 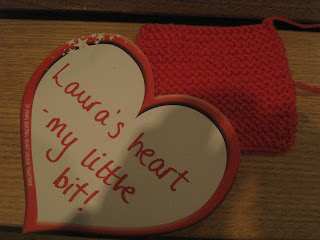 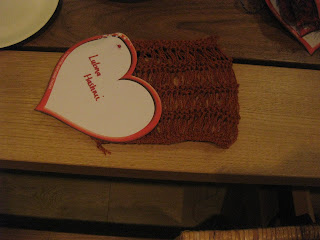 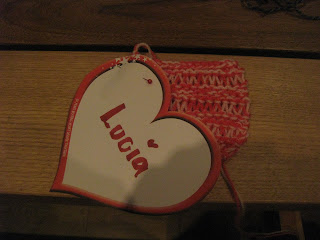 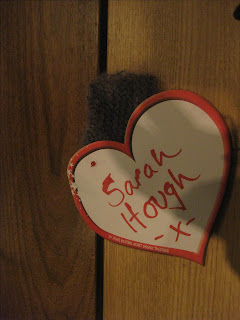 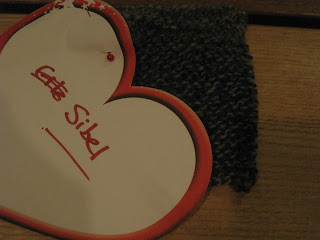 Posted by Knit Nottingham at 14:34 No comments:

Want to learn to spin?

Want to learn to spin, play with fluff, watch the spinning wheel so round and round, make your own yarn using just a piece of wood?????? Knit Nottingham are holding a beginners spinning workshop,Spinning With Drop Spindles, yes this is for total beginners, even those a teeny bit scared of the whole spinning thing. We will look at different fibres ( don't worry, you won't have to shear the sheep) how to use a drop spindle ( yes, you get to take a basic spindle home with you) how to use hand carders, how to use a drum carder if we can persuade Pete to bring his along and you will get to have a go on a spinning wheel. 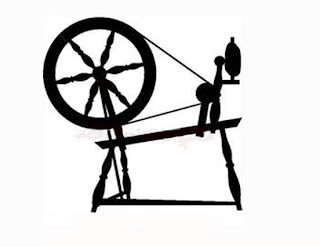 As ever, we will provide the all important bits for any spinning session, tea, coffee and biscuits ! This workshop is intended to be fun and don't worry about putting the 'drop' into 'dropspindle', we've all done it and most of us still do from time to time although I did have a small accident involving spindle, fluff and beer in a pub recently but I won't go any further into that.......


Guzzisue
Posted by Knit Nottingham at 21:03 No comments:

Well after much organising and last minute stressing about whether anyone would be able to make it....Heart Art turned out to be a great success. Thank you to everyone who knitted sqaures in advance, they were put to good use. Below is how the Heart looked at the start of the day. 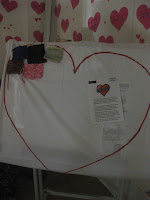 Davenports shop of Originality were so generous and supportive, helping us with setting up the day before and then providing hot drinks on the day, thanks to Sarah, Mig and especially Alicia for her artistic efforts and tea making.

Throughout the day there was a steady trickle of local knitters, which gave us a chance to catch up with some familiar faces but also meet some new fellow knitters and crafters.  Earlier in the afternoon we were visited by Nottingham Evening Post, not sure which day they might do a piece on the event, so keep an eye out. 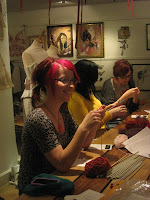 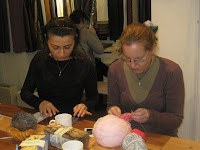 Towards the end of the afternoon things got pretty lively downstairs and at one point it seemed like we might run out of seating space. Even Sarah and Alicia picked up some needles despite having never knitted before. Sarah, below left, attempts meditating and knitting at the same time or she might just be having a power nap. 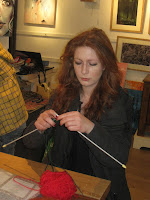 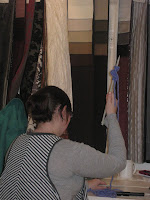 We can't wait to see all the squares sewn into the Heart, it was a lot of fun seeing the different stitches and yarns people were using to create their squares. My particular favourite was the funky fur square (don't worry about the noise....thats just Eleanor groaning in despair, she had a bad experience with funky fur and has never recovered). 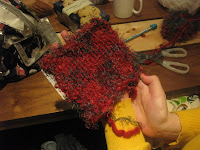 Upstairs was equally rowdy, Kate came up with an inspired idea, offer passerbys the chance to buy one of the squares knitted before the event, which then got pinned onto the Heart.

While over in the window Sue and Pete (our favourite spinning duo) kept local shoppers entertained with their spinning and knitting activities, though judging by the sounds of laughter and chatting drifting downstairs not sure how much spinning actually got done! 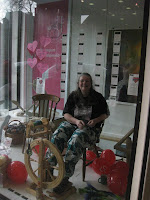 Anyway thanks to all those who came along and made it such a happy successful event, so far we have raised £15. Don't forget that knitted sqaures and donations can be dropped off at the shop until the end of February. Enjoy the photos and once all the squares have been sewn into the Heart, I will do an update on here and let you know where it will be on display. Look out for part two of this update next week for photos of all the lovely squares.

Hi
Well back at the beginning of January, in a post new year haze of wooly love...I set myself the following challenge, to knit a square a month in a stitch I had not done before. A square a month seemed manageable and at the end of the year I would have 12 wonderful squares to knit into a cosy blanket.

Then I went back to work, so before I knew it February was upon me and I had not finished the first square let alone started the next. It's so annoying when work and life get in the way of knitting projects! But I shall persevere and see what I have done by the end of the year.

For my first sqaure I choose a "dotted chevron" stitch, which I found fairly straightforward, think I was over ambitious with the number of stitches I cast on though. Below is a photograph of January's (not quite) a square. 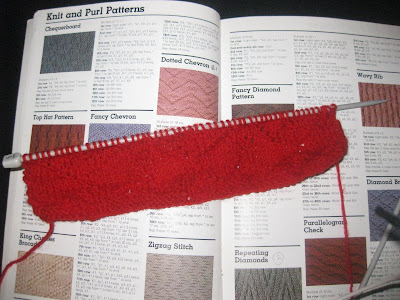 So to try and keep with the schedule and as its already the middle of February (where did the weeks go?), I have put January's square to one side and will make a start on February's later today. This month's stitch is one called "Repeating Diamonds". I will sign off for now and go make a start before its March. See you at the next update. Liese
Posted by Knit Nottingham at 13:29 2 comments:

Here at Knit Nottingham we have been thinking about geeks. Eleanor has recently had a couple of commissions for "interesting" striped hats. Now, Eleanor hates maths with all the fury of hell, but since a fateful encounter with the stock markets she has become obsessed with Fibonacci.

You might have a vague recollection of the Fibonacci sequence from your school days, but the full force of this theory Eleanor proposes, can only be realised through the medium of knit wear. Basically speaking  the Fibonacci sequence is just a series of numbers: 0,1,1,2,3,5,8,13,21,34,55,89....
Each number is the sum of the previous two numbers and the relationship of the numbers next door to each other and next door but one are a series of ratios. These ratios can be translated into percentages, which are found throughout nature, science, architecture and are ever present in analysis of the stock market.
We won't bore you here with the details of the maths - we're too busy knitting - but have a look at this article for a fuller explanation.

Eleanor interpreted the sequence into stripes on the hat, knitting one row of one colour, one row of the next colour, two rows of another colour  then three rows and so on. It's a dead easy stripe pattern, that looks effective and the maths keeps it interesting. You might be starting to think that Eleanor is some sort of genius, but sadly she's not, plenty of geeky knitters have got there before her.

Here's our pick of the best geek patterns:

Beginner knitters are always shocked to find out that knitting is simply a series of knits and purls but its never a suprise to computer nerds that two simple actions, repeated again and again produce infinitesmally complicated results; we're talking binary codes. Using knits as "1" and purls as "0" you could program a whole computer using instructions from a knitted blanket. Taking it slightly less literally, we've found this pattern which uses colourwork to display binary code. You could also interpret a word using cables, say one cable crossing for a "1" and two cable crossings for a "0".

It turns out that there is a complicated mathematical equation that can only be displayed through knitting and crochet - let us introduce you to the Hyperbolic crochet reef project. Don't ask us to explain this one but do watch the video below for a layman's explanation. The creations are really quite beautiful and the project combines three themes close to our hearts; knitting, crochet and conservation.


During the course of a week in the shop, Eleanor finds herself ranting about a few issues over and over. Curling stocking stitch is one of those unavoidable and irritating facts of life a bit like death and taxes. he problem is when you don't know any better you think its your fault and that you should be doing something to prevent it. You might of been on the receiving end of Eleanors rants about heads and legs and if you haven't been or didn't get why Eleanor was frothing at the mouth, this is the lady that started it all. The tech knitter's blog is an incredible resource for anyone interested in intelligent knitting. The sort of knitting whereby you know why your knits and purls look like they do or why you choose a certain cast on and when to swap a skpo to an ssk. We love her clear diagrams and straight talkin'.
Posted by Knit Nottingham at 20:44 1 comment: