I've finally got round to getting the sale on! Oh me oh my it's taken a day and a half of full on work (but it does mean I've finally got the new shades of Opium on the shelf instead of strewn around the floor...). 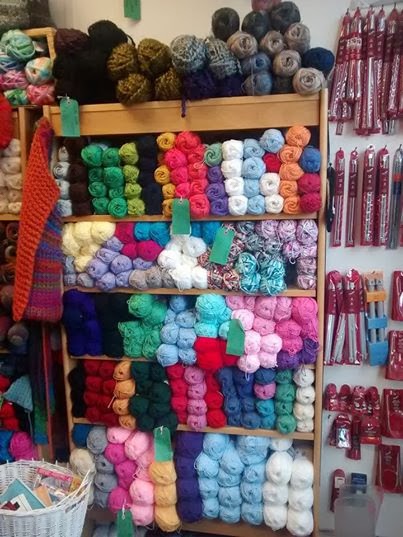 A quick run through then, from the top:

We're going to get this in again later this year but we sold a grand total of four balls over last summer so as far as I'm concerned it's shelf space I don't need to take up. Yeah? Lovely though!

I'm pretty sad about this but I only got it because I fell in love with the colours after the I got the Patons Cotton 4ply in but it's not sold as well as it might have and I've found an alternative that I am head over heels for so as soon as this is gone we'll give the next one a try!

Another one I am saaaaaaaaad to see go because we've had it in since more or less the beginning. Thing is, it's a bloody nightmare on the shelf - it's so soft and drapy that it just falls apart on a ball and it looks a mess which means it doesn't sell that well. People that try it love it and come back for more but it's hard to sell a ball that looks like a big lumpy mess. It was a good alternative for the Bamboo Cotton though. It's probably sold a little less as a baby yarn since we got the Comfort in though. Oh it's hard being a businesswoman when you love all of your yarn. :(

This is the killer for me (I've bought myself another 11 balls to do something with). This yarn is the entire reason that we stock Cygnet in the first place after I fell in love with it after knitting an indestructible hat. But, alas and alack it's time has come and I'm replacing it asap with something that I think is just as good but I need to get this sold so get to it!

We have the plain colours in the Fab DK. Some of them I never got round to putting on the internet so I've taken them off there and they're just in the shop but they're down from £2.00 to £1.00 so it's a bargain. I got the yarn because I thought it was different to the Pricewise DK - it handles much thicker and sturdier so it's good for toys but I don't think that translated well in the shop and I don't have the space to get the full range if I'm planning to keep the Pricewise (and I am < 3). We're keeping the funny colours though because they sell well all year round - hubba hubba.

So that's that - come and spend please because I want space and money to buy all the good new stuff.


Posted by Knit Nottingham at 13:56 No comments:

Really. Where do I start? Apart from it's not quite been a month! Hmmm. Not good enough. To be fair, the days before Christmas were mental. The days over Christmas I was on holiday. And the days since Christmas I've been... busy? I guess? I've made some vague resolutions to keep the shop in better shape and to that end I've done the hoovering twice (TWICE!) since I came back on the 2nd and I've pretty much written an entire fairisle lesson: 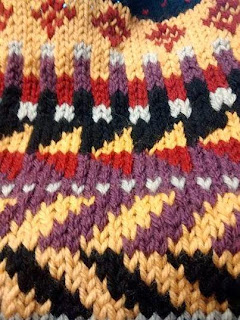 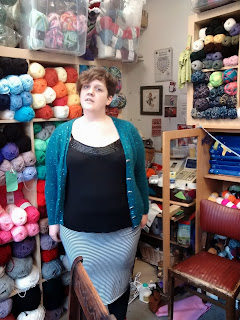 Totes not a model. But to be fair, Jazz is totes not a photographer. Haha. It's pattern number 3870 in the Galaxy DK in Ocean (but it's sold out. Again. I'm going to get it by the ten pack until you ravenous lot have got your fill. :) ).

I've knitted more on Amy's Cardigan. No photos though, soz.

I've knitted more on a jumper I started on the 20th of September and then gave up on. 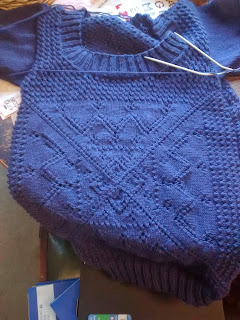 I've no idea why I gave up on it. I LOVE it! And it's nearly there!!!! Vaguely based on this pattern (but of course I didn't bother to read the pattern so went AWOL from about row five....) and it's in the Superwash DK and I'm dead pleased that I'm only on ball number 11 and I should get some good 3/4 length sleeves! That should be done this week.

I've knitted some on my ridiculous socks: 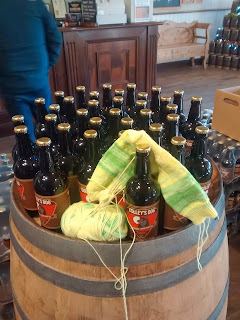 This is they on a visit to a brewery down south (Tring Bewery to be precise). I was there visiting boyf's 'rents who didn't think much to me ("do you like her?" "well, if she makes you happy..." haha) and it's the first time I've ever been to a brewery. I thought it might be a bit like the booze-appreciators equivalent of a yarn shop but it's not. There was no talking, no laughter, no gossip - just slow and considered sipping of different beers. Weird. Anyway, the yarn is the Fluormania Sock (as if you couldn't tell) and it's as lovely as every Regia sock yarn is. Although, I've now lost my finished one (perhaps somewhere in Market Harborough) so the second one has been put on hold.

I went to Market Harborough and found no wool but I did find this bloody brill shower gel: 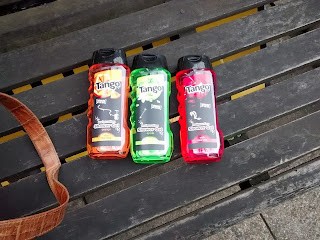 I bought a jigsaw and lost boyf: 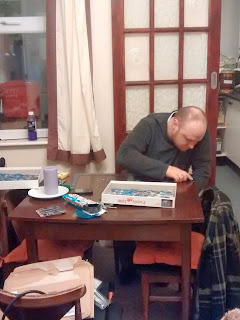 And perhaps most importantly, I cheated on myself and went to the John Lewis sale. Dun Dun Duuuuuuuuuuuhn! I have an excuse! A good one!!

Verity's getting marrrrrrrrrrried!!! And I'm a bridesmaid!!! And the colour scheme is grey!!! (Really Vezza?!?! Grey is so not my colour...). But it meant that I needed some really special yarn in grey to make my dress. Don't get me wrong, my first though was the Galaxy DK but it was too much for the whole thing, so I considered mixing it with the Patons Diploma for the body and the Galaxy for the sleeves but the textures just weren't right. Then I started thinking about the Truly Wool Rich 4ply which was a goer apart from that it was January and the wedding is like soooooooon. Ugh. So me and Verity went a searching for the perfect yarn at John Lewis and I saw some Sirdar stuff in the sale (20 bloody balls of it) and it was perfect. I've no idea of the name (or inclination to search for it...) but it's like a French knitted core in sparkly silver stuff with fluffy grey throughout. It's a chunky apparently but I like it best on a 4.5mm hook. And this is where I am: 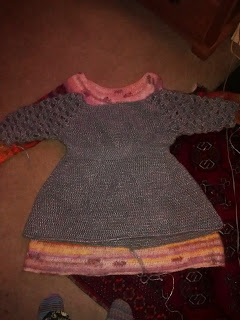 That's it on top of the mohair dress (which I've now felted slightly... does that surprise you?) but I still like the shape it's just a little short. I did a top down raglan rather than my weirdy version of a top down yoke which means that the neckline is pretty different and I'm slightly worried there isn't enough room for my boobs but if they're popping out - all the better I say! It's a special occasion after all. This photo was taken last night when I'd just started my tenth ball. I think I'll need another two or three on the skirt and then I've no idea what to do with the arms. They're about 3/4 length right now and I know that I want full length but in my head they were going to be bell sleeves but then I got the idea for doing tighter sleeves with the little ring thing that goes around the middle finger - do you know what I mean? Like this: 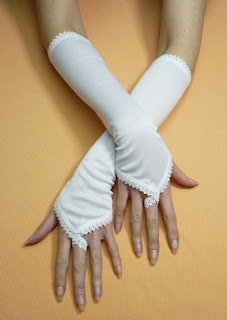 From here. But is that too bridal? I'm deffo not the bride. Hmmm. I think I've got a bit of time left anyway, I'm going to finish the skirt, try it on, find some shoes and then finish the sleeves (and perhaps add some of the same lace onto the bottom of the skirt?). Who knows?!

Am I forgiven!? I always say to customers that we can't stock everything so you need to go elsewhere for some things. It's just the facts of life. When we get the bigger shop though there'll be no excuses. Haha.


I'm also using the dress as a bit of a wip-sorterer-outerer. I'm only doing that at home in the evenings because I want it to be top quality and I've decided that the projects that I take out and about are only going to be wips and not anything new. I can't really estimate how long it'll take to do the bridesmaid dress because I'm not getting very long to work on it with me being socially busy at the minute but I have a lot of wips to get to grips with! I have said though that once they're all done (or frogged if I decide not to carry them on) then I can start on some new socks, but it's got to be from stash. I will get all of my projects done this year! I guess that's a new year's resolution. I'm just not calling it that.

OOOOOOH. And before I started on this 'resolution' I did cast on a new jumper in the Opium because the new colours came in and I couldn't not. I swear, it's an actual addiction isn't it!?

Phwooooooooar! Look at that! There's a load of new patterns for it too: 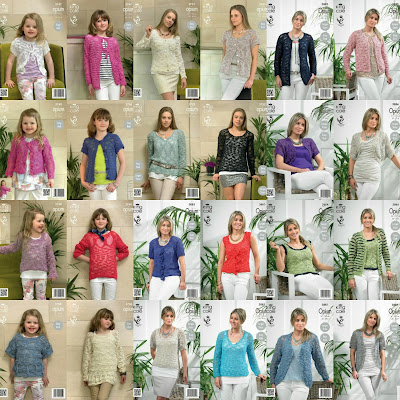 But I must admit I'm still hung up on the old ones so I chose this pattern: 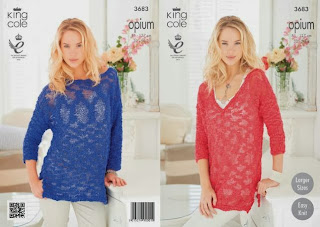 Which is 3683 and I'm doing it in the Navy colourway but I think I might do it shorter. No decision on whether I'm doing the slash or vee neck though. Ahhh decisions decisions! Anyway, find the Opium here and the new patterns here.

Here's me looking disappointed in myself for the amount I've done: 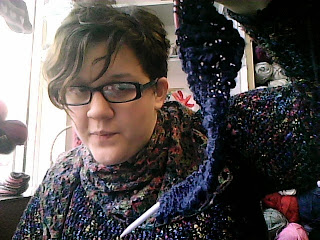 But can't you tell that it's going to be just bloody brilliant when it's finished!!!

And just before you go, feast your eyes on this beaut!!!! 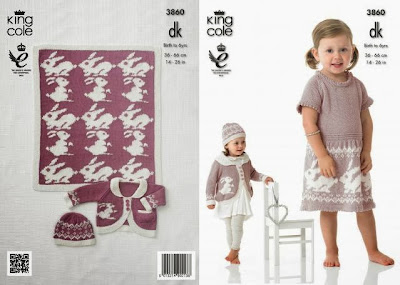 It's also in the new patterns tab and it's been causing a bit of a stir in the shop and on the facebook group. Go ooooooooooooon - you know you want to!

Ooooh, you don't know how relieved I am to have got a blog done! It's been on my mind for a loooong while but I've just never had the appropriate time! One more thing on my to do list and then I'm going to kick back with some tea and do my Opium jumper! What a life!

Eleanor. xxxxx :)
Posted by Knit Nottingham at 15:10 No comments: