So, I'm up to date with my blogs! And with this one I'm going to be 'over' - you don't know what kind of a sense of achievement that gives me. Ahhhhhh. Last week it felt like I tied up a few ends and now I'm feeling dead positive. I feel like I can begin some new projects - and not of the knitting/crochet variety (though of course I won't let that not happen...). Today I'm going to do one of my 'get-us-up-to-date' posts and then I might have a couple of days off blogging... for all of our sakes. ;)

So, in the end last week I finished three pairs of socks! THREE! These ones: 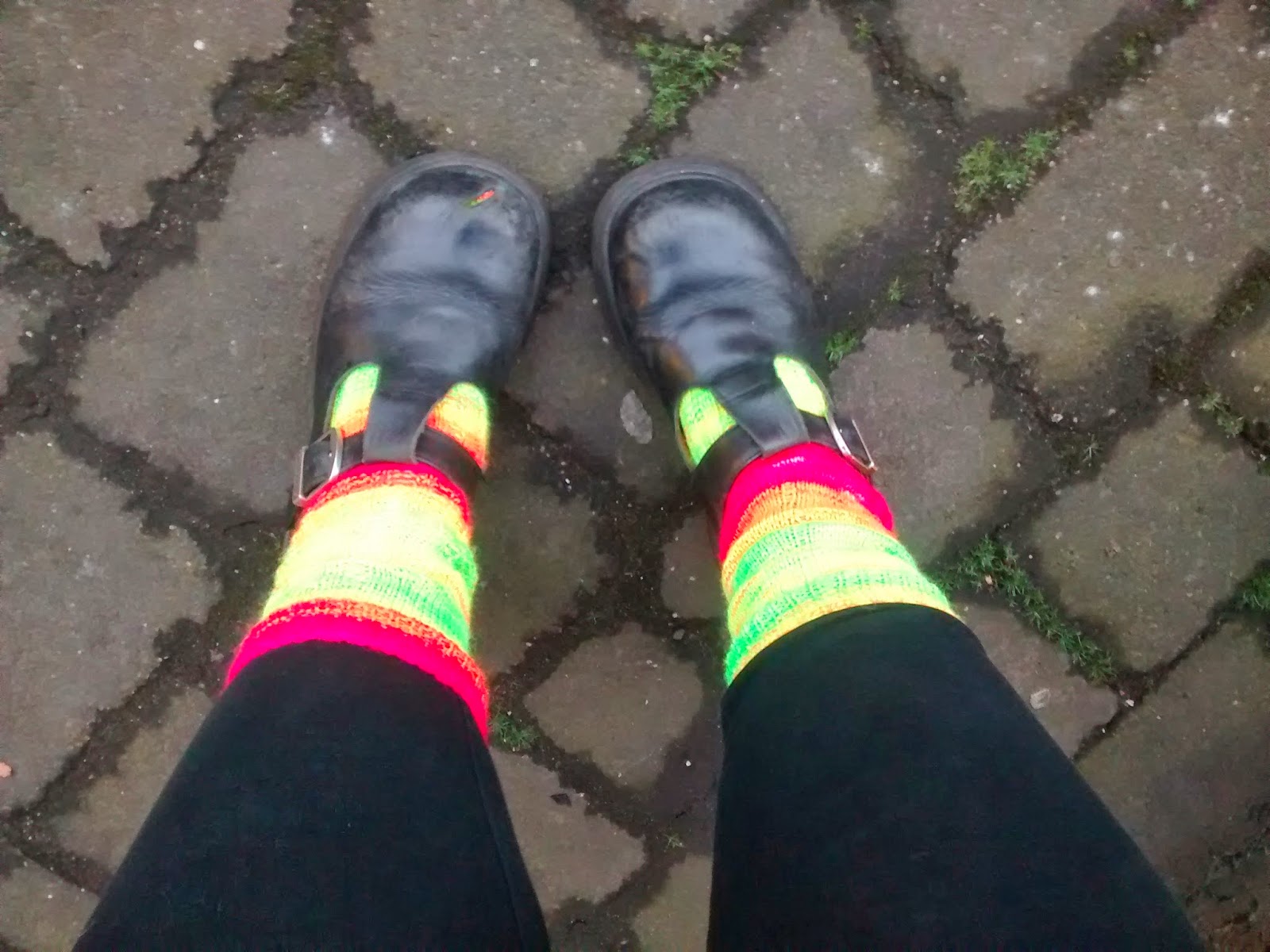 In the Rainbow Fluro sock. These ones: 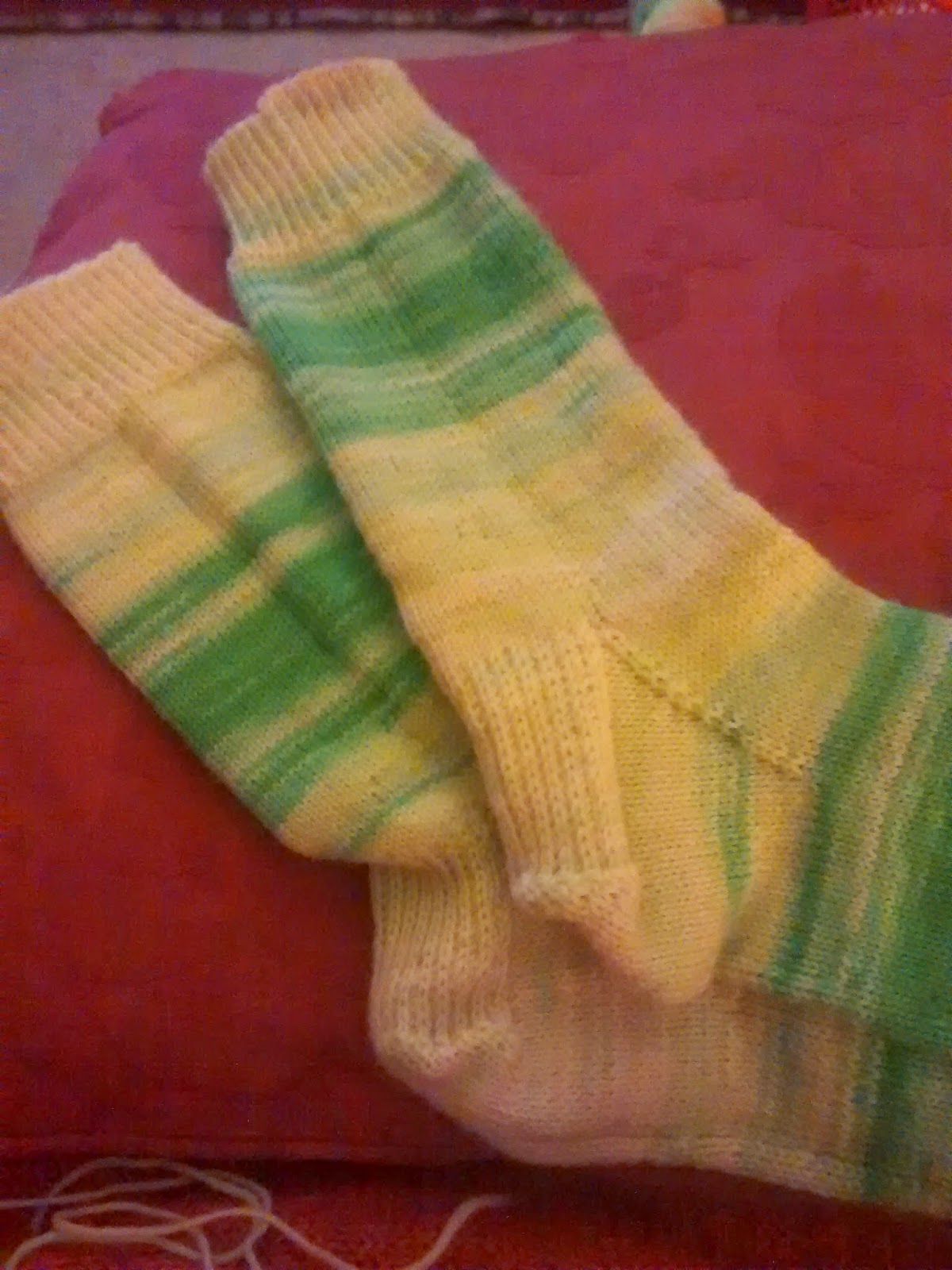 In the Leaf Neon Fluro Sock. And these ones: 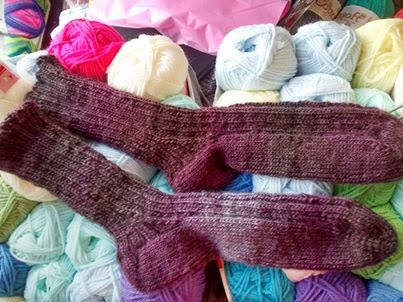 In the West Yorkshire Spinners Aran that I bought in York. Boyf has been wearing these like he has no other socks (possibly because I keep throwing out all of his socks with holes in, and cutting them up so he can't fish them out. Did I tell you how much he likes me being a harridan?).

I didn't mean for last week to be the week of socks but apparently it was. I had big plans to finish this pair off too: 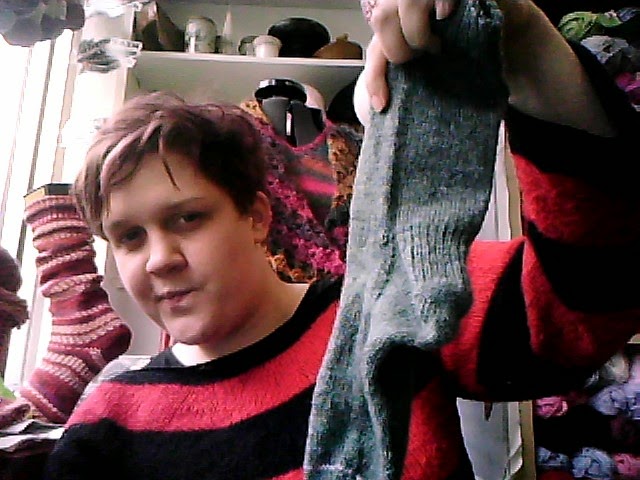 But as you can see by my face - that didn't happen. I got sidetracked and there's only one and, since this morning, a cast on for another. Can you see the little tiny stripe near the toe? That's because I'd forgotten that I've knitted my mum basically the same socks a year or so ago so I didn't want them to get mixed up if they go in the wash together. Clever ey? I put them down a month or so ago after I'd done most of the foot of the first sock, and then when I decided to knit something else and I needed those needles, so I took them out without securing the stitches thinking that I'd just rip the sock out and reuse the yarn because I wasn't that enamoured but I didn't end up ripping them. So this morning I was able to reget the needles in but I did a few rows to reorient myself and work out how many stitches should be on each needle but it means that the feet are about an inch too long for me - perhaps Boyf wants them? Hmmmm. Anyway, it's the Cygnet Truly Wool Rich 4ply in Pine and they're going to be lovely. I will finish them after I've finished this!!!!! 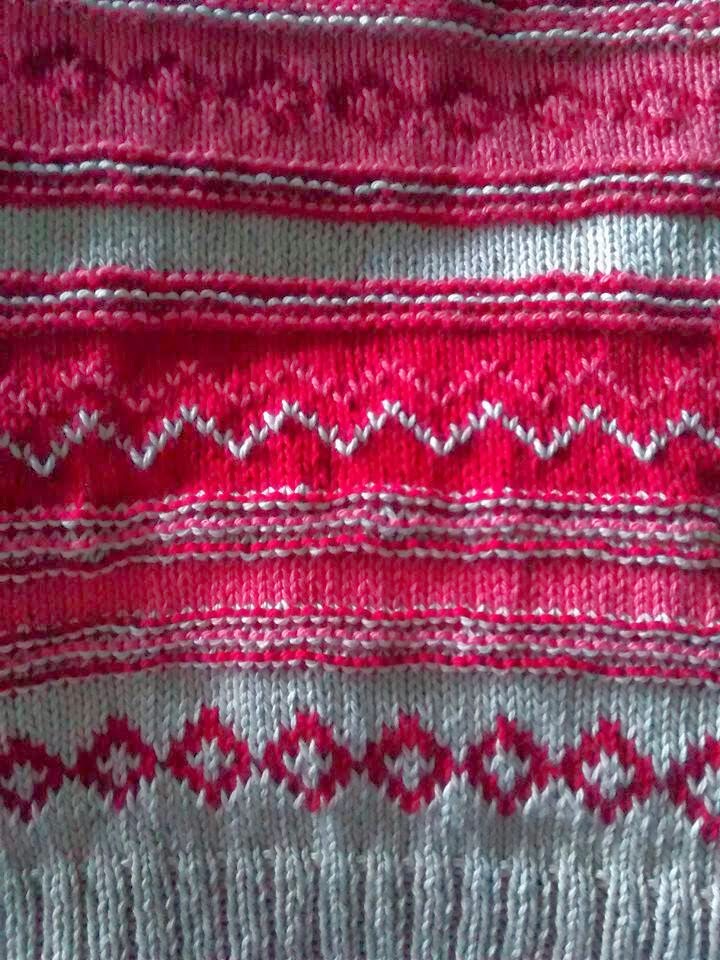 GAH!!!!!!!!!!! Is that not the most BEAUTIFUL THING you've ever seeeeeeeen!?!? It's a Sophia Loren Pullover from Knitty. Sometimes I'm just blown away by how brilliant that site is - lately I feel like I'm falling in love all over again. Have you seen the newest issue? Anyway, it's in the Cottonsoft in Oyster, Coral and Cherry and it's knitting up like butter. Like butter. :) Now, the Oyster's a little too much like beige for my liking (Elizabeth listen up!) but because it's with the other two I can stand it - there were other options though, like these two with the cream or the Jade and Navy with the Silver. Somehow though, I plumped for the beige and it just so happens to be THE ONLY BLOODY COLOUR WE ONLY HAD ONE OF! UGH! So, I went and bought some on Sunday but it hasn't turned up yet. I've done the body up to the armholes and one of the sleeves for about four inches but I've got, I would estimate, about 15g left of the Oyster left and I'm deffo going to run out and the yarn isn't here and ugh ugh ugh, that's why I've restarted the Pine socks - at least that's something to knit and I feel like I'm being useful because they've been on the needles (after a fashion) for a looooong time. Finishitis - you're still here! Kinda...

Another project I've been working on is this: 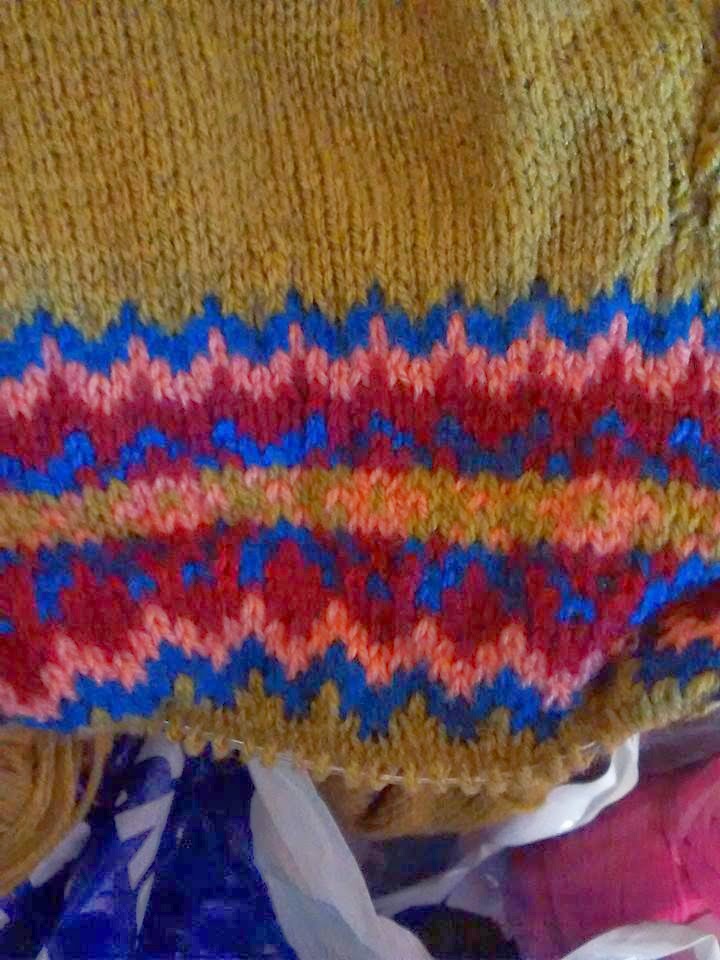 It's a little fairisle yoke cardi for a customer - I talked about it here a bit. I love fairisle! I don't even mind it when it goes wrong, I just kinda work out where it's wrong and increase or decrease in the appropriate places (using ssk's or k2tog's depending on which stitch I need to show) and carry on with my life. Sooooo not an OCD knitter. And I did that with this one, then when I tried to purl back it all went wrong again so I had the brilliant idea of doing it in the roundddddd! Then of course, all of your stitches are facing so it's much easier to see where things are going wrong and to put things right, I also think it's easier to keep tension. So I finished the last 15 or so rows in the round on Saturday in the shop whilst chatting to customers. Put it down for a minute and then my heart sank. It's a bloody cardigan. Of course, if it were for me, I would have steeked the hell out of that but it's not so I couldn't. So yesterday, I got up extra specially early and whilst watching Lorraine and Jezza I ripped and reknitted and actually the pattern works. Me and the customer were convinced that it didn't but it does when you take time to look where the decreases are supposed to be. It does work. And I'm pleased with it.

On a related note, it's in the Poundland acrylic because she wasn't sure if she could do it and didn't want to spend hundreds if she didn't have to. THAT STUFF IS BLOODY HORRENDOUS! Of course I would say that. But it is! I admit, the colours are nice - that green is to die for actually - and I love the way that she's put them together, dead unusual and they 'work', yes? But it feels like it's dirty. Actually dirty, all the way through knitting I was thinking 'I wanna block this, I wanna know what it's like once it's been washed and sewn and pressed' but I didn't have enough time and it's not what the customer asked. On a separate mission yesterday I popped into Poundland and had a look at the range... hmmm. Now, it's on 3 for 2 which means that you pay £2 for 150g. So, it's slightly cheaper than our Pricewise DK which is £1.85 for 100g. But they also don't put on their labels what yardage it is and I suspect that the yardage is pretty bad - otherwise, why on earth wouldn't they put it on? Like when they do toothpaste and you think you're getting a bargain but they've actually negotiated smaller tube sizes. Anyway, I'll stop bitching about their yarns now. I've got better things to talk about.

Like the Fairisle Course in a couple of weeks!!! We're making this: 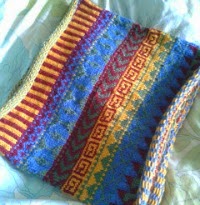 So if the fairisle bug has bitten you after my two projects - get on it! Book here.  It's genuinely dead easy and I am going to LOVE teaching this course so I'll be at my articulate best, I promise lots of ranting! :) 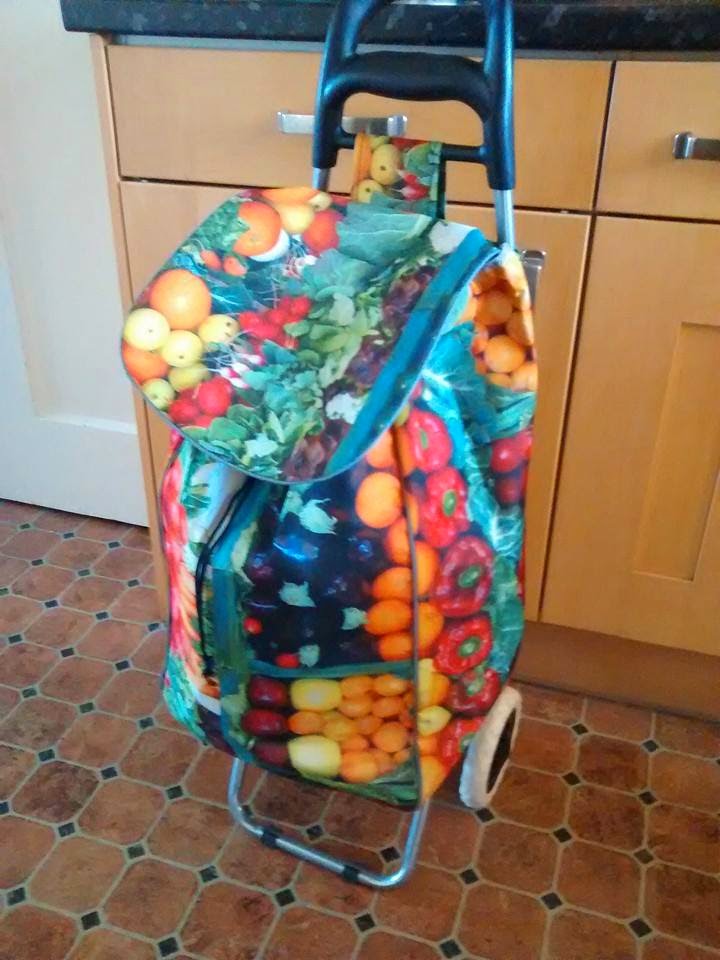 My new saddact trolley! And I don't care what anybody thinks - least of all my sister who is h.o.r.r.i.f.i.e.d. Ha. I got it from a closing down shop and it was cheap but I'm totes not surprised he is closing down because when I was trying to get it off the rack he came huffing and puffing behind me saying there were some to take out the front but they all had price labels on and this was the last one on the rack so I was doing him a favour. Horrid horrid man. I'm glad I rescued me trolley from him. We're going to get along fine. I've got lots of parcels to fill it up with already but I have noticed that the bus drivers keep lowering the bus for me - veritably part of the old granny crew now! :)

**OOOOOOOOOF - GUESS WHAT JUST TURNED UP! Only my bloody Oyster yarn! ARGH! Now I can put the sock away and just knit my jumper. WHAT A DAY!**

My plan for the rest of the day is just knitting. I know this sounds like cheating but I have missed knitting club for six weeks running because I was doing a 'financial fast' for the first three weeks and then I've just been knackered. I think it's because Tuesday is my start of the week so I always begin stuff then and I'm excited but by the end of the day I've tired myself out. So all I've done today is this and serving customers and once this is done I'll answer the e-mails and then I'm knitting and in that way I will get to knit club. I think it's important for me to attend because these are my people and it's good to know what's happening with knitters other than the ones that come into my shop - obvs, most of them buy from me every now and again and some almost exclusively but there are 'Rowan Knitters' there too so it's kinda like the other end of the scale - know what I mean? So now I can knit on my jumper at knit club. After I've done my bits.
I also wanted to mention before I head off, that there are still spaces on the Yarndale trip. In fact, off the top of my head, there are 19 of you booked which means that it's still not definitely on (even though it kinda is... as if I'd miss that!). Please book if you want to come and also spread the word even if you don't. Click here for the page or give us a ring or pop in.

And that's it - I think we're up to date. See you in a few days (unless I have something mega to say).