On Getting Knitting Wrong.

Ugh. I've had a really depressing day. There are two things that I want to get done before I start on the big app thing (also, I'm waiting on my book to arrive) but both of these two things that should have been easy have turned out to be hard. And I'm sat here with three windows up (two separate helpdesks and Crazy Aunt Purl which I'd totes forgotten about and kinda rediscovered (though I never really discovered it in the first place) last night after spending some time with two other mad knitters...). I'm knitting too. I'm actually doing the last little bits of Amy Singer's Cardi which has taken me a shameless three (ish, maybe more) months... Why? Can't tell you. Honestly don't know. Who takes three months to knit a bloody sweater? Well, lots of people (and that's fine!) but not me! Anyway, I'm getting there and I suspect that the knitting will be done today and therefore the sewing in ends/blocking/sewing together can be done tomorrow and then I want to go a-hunting a little for a gift for Amy because the package came with sweets and needles and Amy deserves love. Always.

AAAAAAAAAAnyway. Separately from me having. Friends. In. High. Places. (Seriously, I am a total fangirl when it comes to Amy and I keep telling her. Smooooth), I am also either a bloody terrible knitter or over confident or just a tit. Any one of these three fit me and the two mistakes that I've made recently. I'm going to start with the mistake that I made on a cardi for me because if I leave telling you about the one/s I made on Amy's sweater then I might have a kinda FO to show you? Perhaps anyway...

So, I told you about the cardi I want to knit myself here: 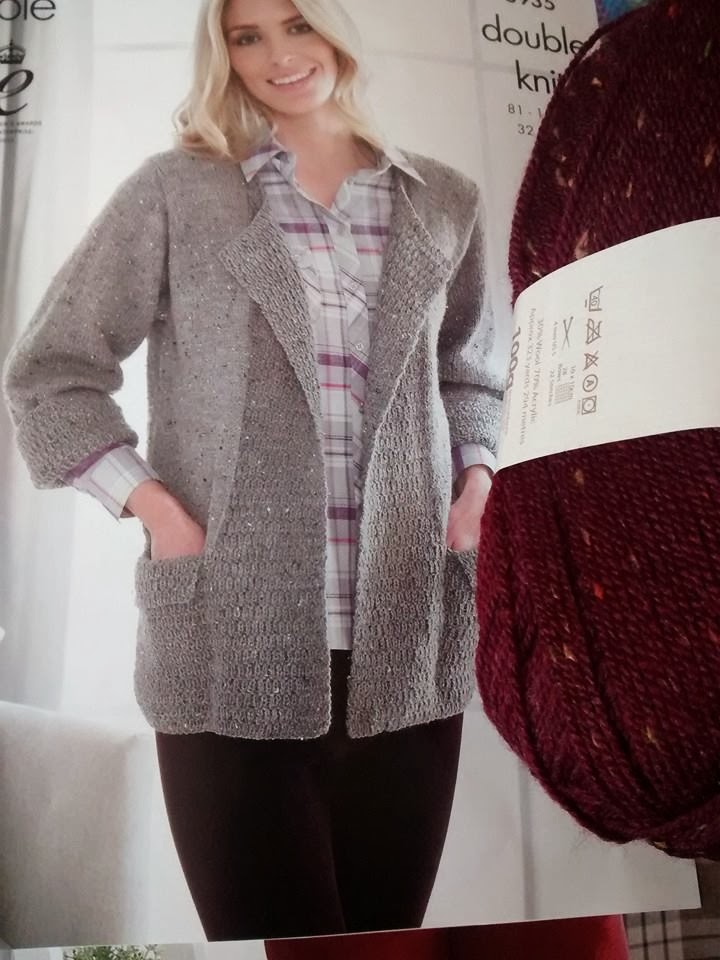 Remember? I'm actually pretty pleased with myself because it is... boooooooooooooring. The sizing is something like 42.5" finished chest or 45" finished chest. At the mo I'm bobbing between a 41" and 43" depending on the time of the month so I'd usually go for the 42.5" but I wanted this to be baggy from the outset - not oversized mind, just comfortable. So I went with the bigger size. But more than this, dear readers, I thought about what I know of King Cole's patterns and I decided to do the smaller size arms. King Cole pattern's arms often end up too big, I'm not sure if this is just the size that I end up doing (lots of places think fat people are fatter all over so arms end up like tree trunks, armholes end up in your waist, you have to be 6 foot to wear them... ugh...), or if it's to do with the designer and how s/he likes things, or perhaps if its to do with (...and I'll try to put this delicately...) the target audience being 'ladies of a certain age' who are perhaps more conscious of their arms? Hmmm, I'm sure somebody out there knows but not me. So I'm pleased with myself because I thought ahead enough to think about how I want to wear this and therefore the appropriate size and to adjust for the sleeve size given that it's already going to be pretty big and I'm doing the bigger size.


Hmm. I started with the back. I don't always start with the back but I thought that seeing as I'm doing a size bigger than I usually would, and it's mainly stocking stitch, I might aswell get the biggest bit out of the way. I also read a bit ahead to see that there was some shaping and I like doing the back on shaped things first because it's an easier way to make a template for the fronts, rather than having to mess about with any neckline/front shaping aswell as doing the waist shaping for the first time. Does that make sense? Therefore whatever I do on the back I'll recreate on the fronts (unless there's a specific reason/design feature that means that's not appropriate). So rather than having to read the shaping details for the back and then one front and then the other, I'll do the back and then I'll know that half of that also applies to the front. Yes? Well, it's the case here - essentially you do about five decreases slooooooooowly up the back before working straight for a few inches and then shaping for the armholes. Pretty standard, gentle A-line shaping, perfect for my slouchy cardigan. Dead easy. :)

What it also means is that, any mistakes that I make can be reiterated on the fronts. And I made one. The bottom ribby bit gave eight rows to set up the pattern and then said "work 44 rows more". Fourty-four rows more people. More. That's 52 rows of ribby goodness at the bottom of my cardigan. I worked 44 and not a single row more. Yes I did. Problem? What problem?

You knit the pocket linings (somehow I thought they were patch pockets which would have solved all of this but I am terrible at sewing those things on neatly. It's like actual sewing! Imagine!), then you knit up to the 51st row of the front, put some stitches from the front on hold, knit the stitches that had been put on hold from the pocket and then carry on with the rest of the front with a placket in the stitch pattern but mainly in stocking stitch. Does that make sense? Buuuuuuuuut my 51st row wasn't in the pattern. Bum. And so, they go into all of the explanation of how to set up the placket bit after you put the pocket in and, and I can't explain why without giving the pattern away, it means that I had to fudge around a bit. And really, problem? What problem? 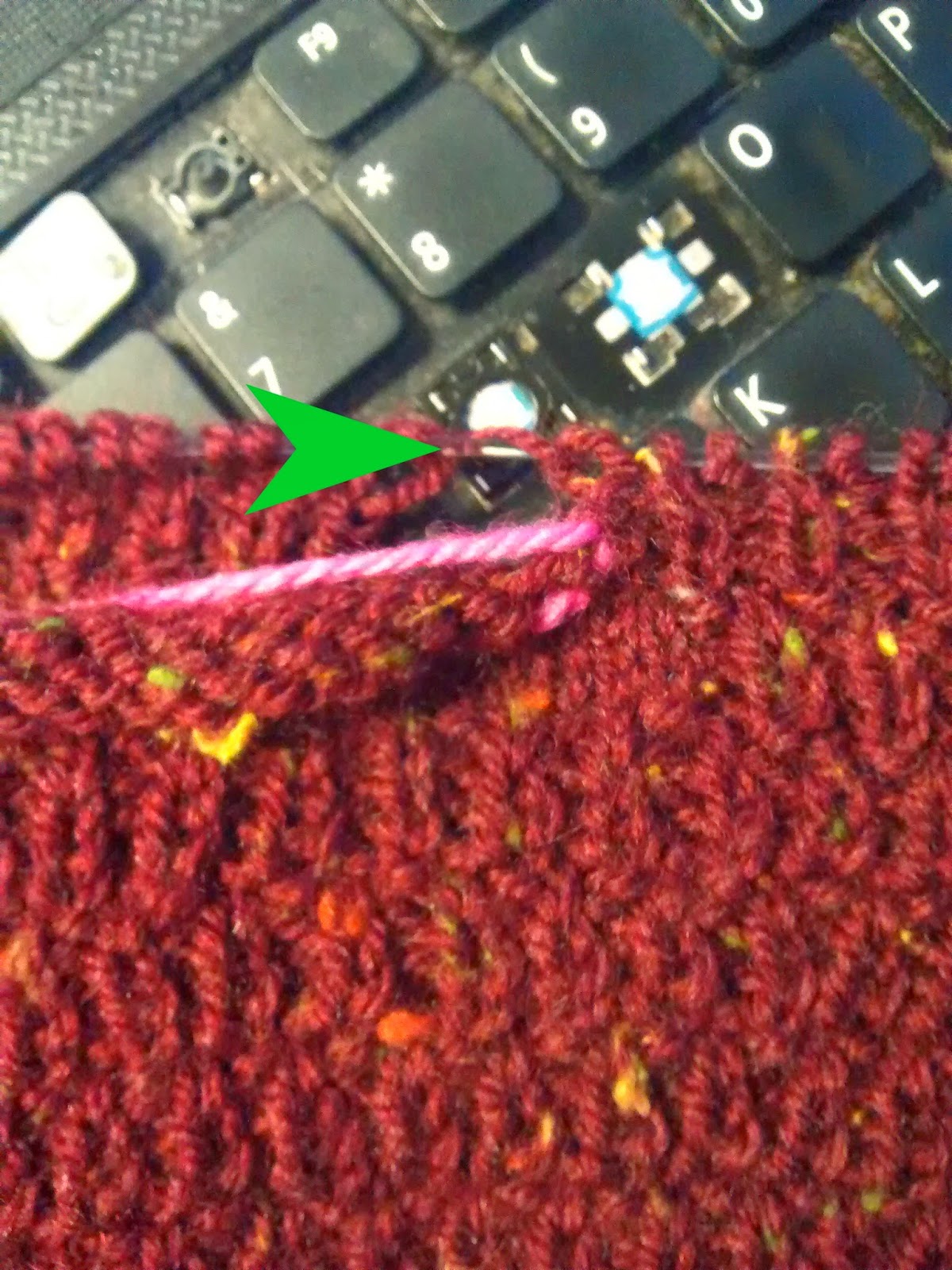 Offending none stitches (and a closeup of my beauts laptop keyboard...). 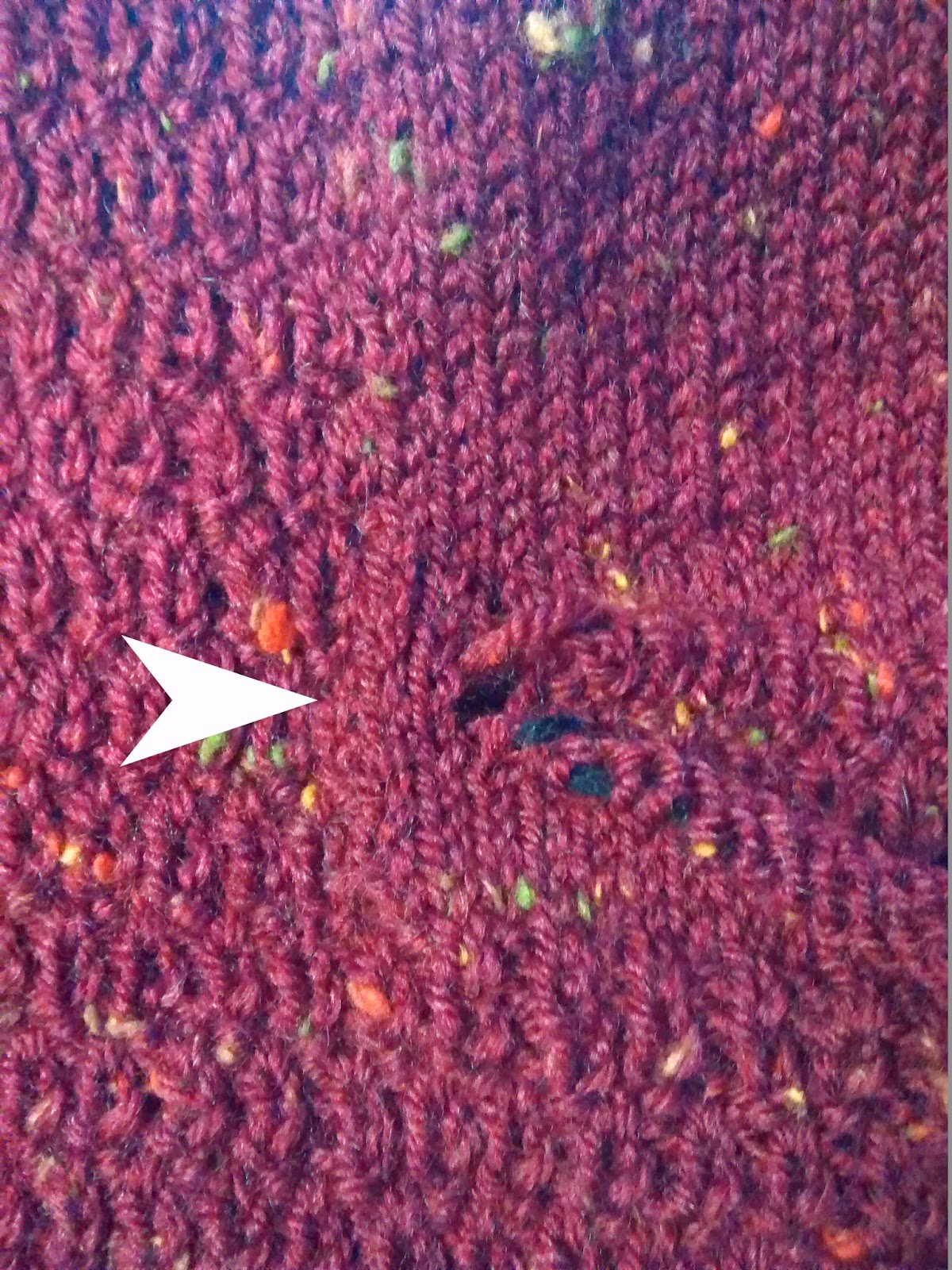 I've left it where it is, I've done the row that connects the pocket in place on the second size and I've concentrated on Amy's thing whilst I think whether those three or four stitches matter. I'm thinking not because if we look at the picture carefully: 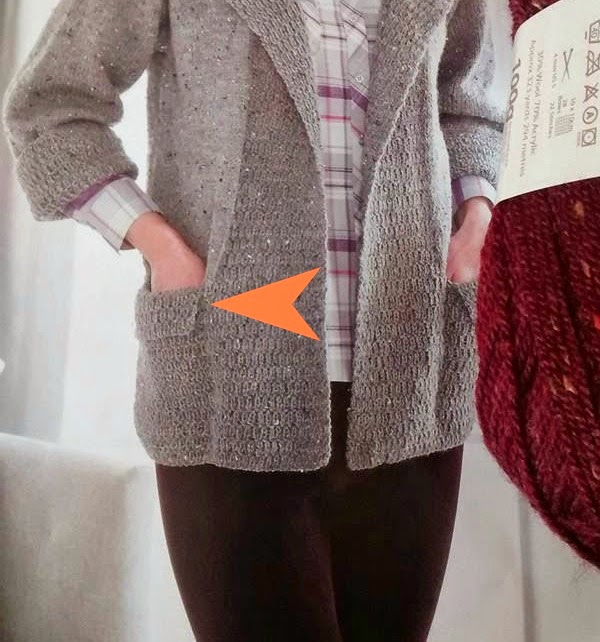 (Photo editing skillz. I has them).

The pockets, or rather, me not bothering to read the instructions for the pockets carefully, have also caused me another bother. You do a couple of decreases on the pockets - either at the beginning or the end of the row depending on which side you're knitting. I read this as decreases on 'each end' of the row so I decrease two stitches more than needed on each pocket. Problem? What problem? Problem being that when you put the stitches from the front on hold and you're still in a drunken stupor from last night and you're trying to concentrate on Jonathon Creek (and you raaaaaaaarely knit pockets because they always. go. wrong.), you don't realise that the stitches that you take off are corresponding directly to the stitches from the pocket that you're putting on. Which means that you end up with two less stitches, and because you're a bit of a knitting arsehole and you can knit and therefore you don't need to count stitches and it looks about right, you also have two stitches less when you get to the armhole shaping. Ugh. This is less of a problem though, I just cast off two less stitches at the armhole before the armhole shaping and I'm done. But still. What a tit.

So really. This isn't about getting knitting wrong. This is a cautionary tale not to knit whilst drunk from the night before and watching Jonathon Creek.

Tomorrow (or perhaps in a few days depending on how busy the shop gets), I'll tell you about another knitting mistake caused by me just not reading the pattern. The twist in the tale? This is the second garment that I've made from this pattern and I still didn't bother to read it. Ugh.

Also, sorry about lots of writing - here's a photo of every bit of this knitting that I have with me: 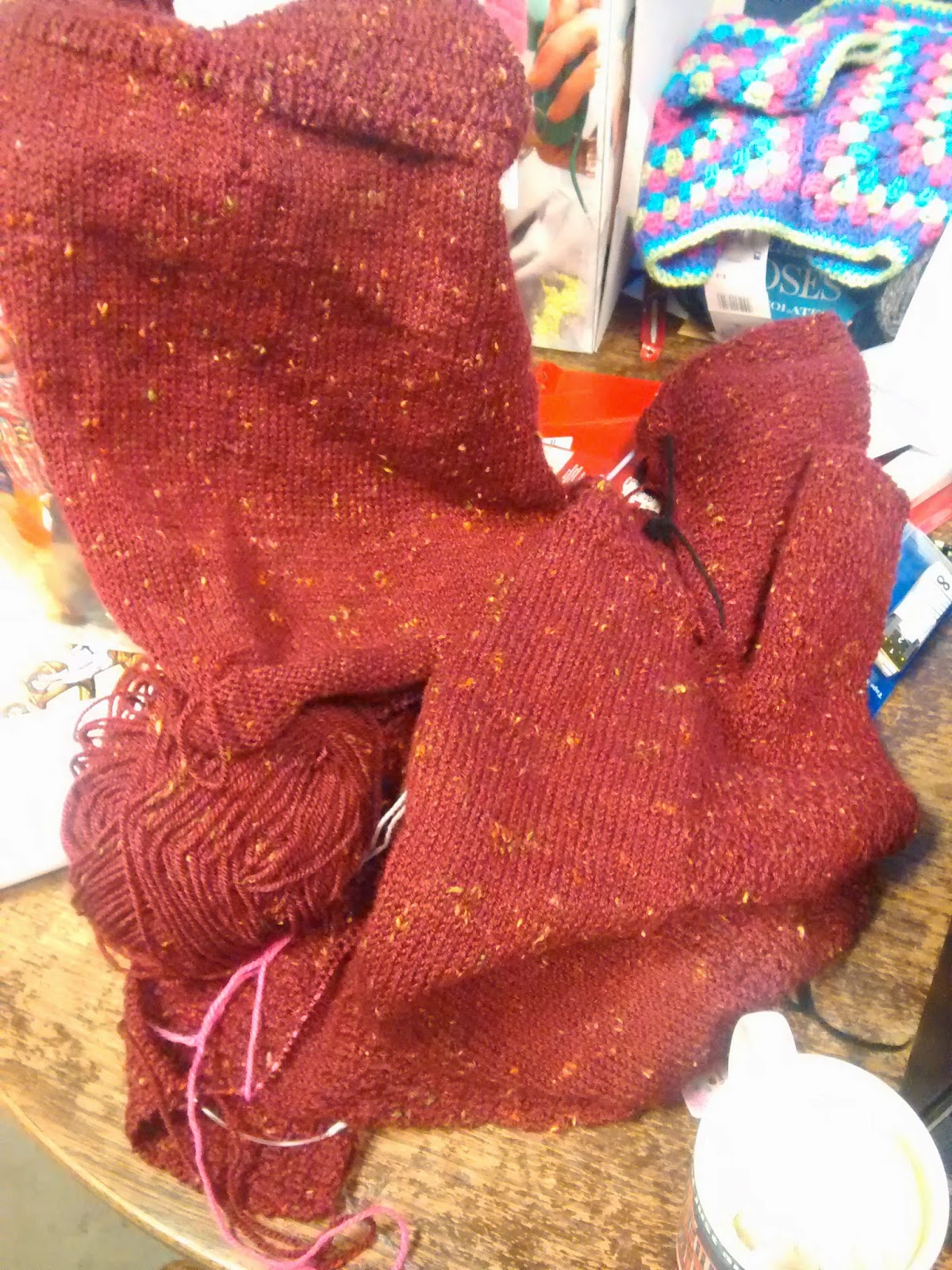 I'm going to call that 'artful'. Actually, it's 'it's six minutes past six and I need to get home to do my nails for a wedding tomorrow'. Ugh. Have I reached the age where everybody gets married every weekend? I can't bloody afford it!

Posted by Knit Nottingham at 13:50